One of things we looked at before deciding to add a listing of plugins that had not been updated in over two years was how many plugins fall in to this category. We first checked a small sample and found that many of the plugins fell in this category. When we looked at all of the plugins we found that was still the case. As of yesterday a total of 12,703 plugins had not been updated in over two years. That is 30 percent of all the plugins that have entries in the Subversion Repository for the Plugin Directory. Not all plugin entries have actually been used, so the percentage of plugins that people could being using is probably higher.

Below we have charted what year these plugins were last updated. The number for 2012 is lower as plugins last updated after March 9 of 2012 would still under two years out of date. 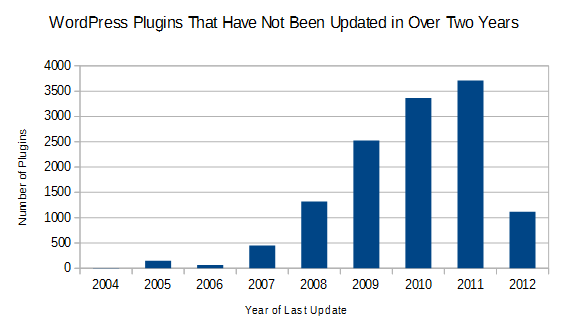