Plugins play an important part in the success of WordPress, but they also introduce their own issues. Security issues obviously get a lot of attention, but there are other issues like the fact that not all plugins continue to be supported long term. One measure of how many plugins continue to be supported is to look at when plugins were last updated, as even plugins that have not needed any changes should have been updated periodically to indicate that they are compatible with new versions of WordPress. On the WordPress.org Plugin Directory, plugins that have not been updated in over two years have a banner at the top of the page that states “This plugin hasn’t been updated in over 2 years. It may no longer be maintained or supported and may have compatibility issues when used with more recent versions of WordPress.”:

Last year, following a suggestion for our No Longer in Directory plugin, we added the functionality to list installed plugins that had not been updated in over two years in addition to its listing of plugins that have been removed from the Plugin Directory. We also put up a post looking at how many plugins that met that criteria at the time. Now, a little over year later we thought it would be a good time see again how many plugins haven’t been updated in over two years.

Below we have charted what year these plugins were last updated. The number for 2013 is lower as plugins last updated after May 18 of 2013 would still be under two years out of date. 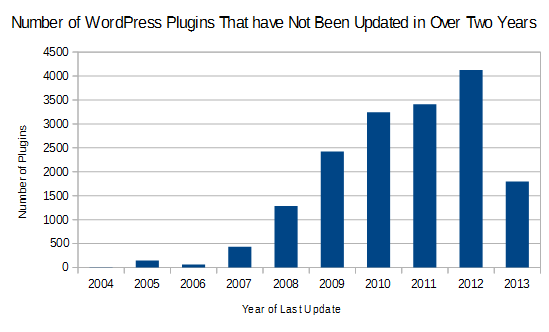 While the WordPress.org Plugin Directory website displays a warning banner at the top of a plugin’s pages, inside WordPress a similar warning is not provided. Here is what is shown on the Add Plugins page in WordPress for the same plugin shown in the screenshot above:

Here is what you see if click the More Details link on that page:

Also if you have one of these plugins installed you don’t get shown any notice on the Installed Plugins page: