In the last day there have been quite a few security journalists writing articles claiming that 1.5 million pages on WordPress websites have been defaced due to a vulnerability that existed in WordPress 4.7.0 and 4.7.1. In looking over those articles we have found that in some cases the claim isn’t actually sourced at all and what appears be the original source for the figure in the others, which came from a security company, isn’t reliable at all and that the journalists ignored a huge red flag that should have warned them that the claimed figure and the source of should not have been relied on.

First let’s look at a couple of the articles with unsourced claims. The Inquirer’s article is titled “WordPress hacking spree sees 1.5 million web pages defaced“; nowhere in the article is a citation for that claim provided. The closest the article gets is this:

According to a report on the BBC, there are millions of pages that have already been defaced thanks to the vulnerability.

In that BBC article the claim is not sourced either:

One estimate suggests more than 1.5 million pages on blogs have been defaced.

In ITworld’s article “Recent WordPress vulnerability used to deface 1.5 million pages” you get a source, but no explanation as to how the number was calculated, which seems like important information to provide:

Since then the number of defaced pages has grown to over 1.5 million and there are 20 different attack signatures, according to statistics from Feedjit, the company behind the Wordfence security plug-in for WordPress. The number of unique affected websites is estimated at around 40,000, as a site can have multiple defaced pages.

Also worth noting here is that there is an estimate of the number of websites impacted, which seems to be the more relevant number to be the headline number, assuming either was accurate. We don’t think there is much question as to why they went with the pages number, with the current state of security journalism click-baitness is more important than providing high quality reporting.

The Bleeping Computer’s article, “Attacks on WordPress Sites Intensify as Hackers Deface Over 1.5 Million Pages” cites nearly identical numbers as to the number of pages and websites:

Attacks on WordPress sites using a vulnerability in the REST API, patched in WordPress version 4.7.2, have intensified over the past two days, as attackers have now defaced over 1.5 million pages, spread across 39,000 unique domains.

It also looks like they are citing Wordfence for their number of web pages defaced as well:

The number grew to over 100,000 pages the next day, but according to a report from fellow web security firm WordFence, these numbers have skyrocketed today to over 1.5 million pages, as there are now 20 hacking groups involved in a defacement turf war.

When you look at Wordfence’s post the claim of 1.5 million pages is based on Google’s estimate of how many pages contain certain “hacked by” phrases:

On the far right we also include the number of defaced pages for each campaign, according to this morning’s Google results.

Are those reliable? The answer seems to be no. Here is how a BBC article from 2012, “Are search engine result figures accurate?“, starts out:

Enter the name Tim Harford into Google and you get 835,000 results.

Or 325,000, or 285,000… I got these widely differing results on computers within metres of each other in the same office at the same time.

So using those as headline number and not disclosing that it is the source (along with a disclaimer as to the questionable accuracy) seems quite inappropriate. It gets worse though, because in Wordfence’s post they take this misleading number and stretch in even further. In their chart they labeled the 1.5 million page estimate as being the number of “Hacked Sites”, not web pages: 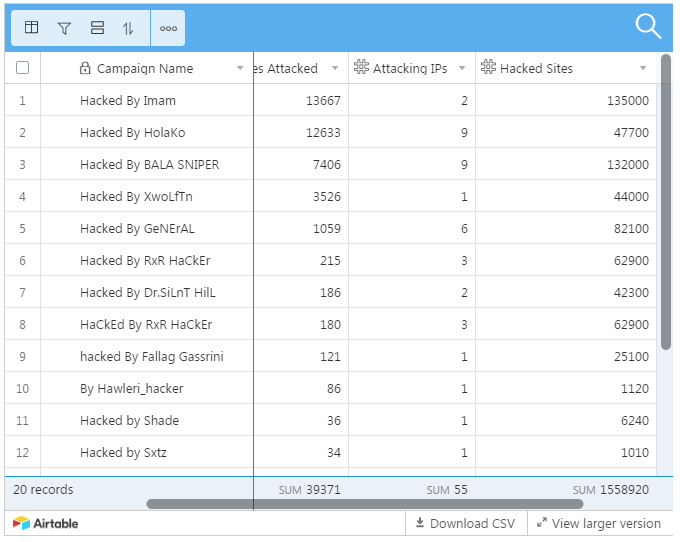 That seems like the sort of thing that should have warned journalists away from that, but security journalists don’t seem to care much for accuracy.

The 39,000 unique domains or around 40,000 websites figure also looks to come from the same chart. The problem that appears to be a measure of websites where Wordfence saw an attempt to exploit this on, not the number of websites hacked: 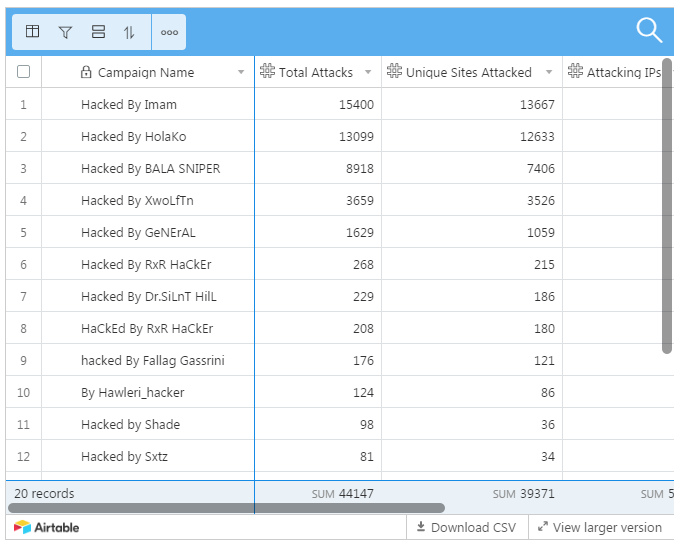 Considering that any WordPress websites running 4.7.1 when 4.7.2 was released would have been automatically updated to 4.7.2 and protected against the exploit long before the attacks started, unless the automatic updates feature wasn’t working on the website (which we don’t see being the case with many websites) or it was disabled (which people sometimes foolishly do), the number of attacks that could have been successful was probably a small portion of the 39,000 attacked.

Unfortunately what has happened here with these inaccurate claims of the size of exploitation are all too common these days due to the poor state of security companies and security journalists.