One of the basic measures needed to keep websites secure is to keep the software on them up to date, as that prevents them from being hacked due to a known vulnerability in the software. That unfortunately isn’t something that people are very good at doing. With Drupal you can get fairly good data on how well people are at keeping up to date due to the developers publicly releasing data on what version are in use. When we looked at the data in late March we found that only 33 percent of Drupal 7 websites were up to date and only 72 percent of Drupal 7 websites were up to date or less than year out of date.

With a highly critical vulnerability fixed in Drupal 7.32, which hackers started exploiting shortly after the fix being released, we are curious see how fast websites are being updated. The first week of data, for the week of October 19, has now been released and it shows that only 12 percent of websites have been upgraded to 7.32. We should note that it is possible to patch the vulnerability without doing a full upgrade, so not all websites that have not been upgraded are necessarily vulnerable at this point.

That number is better than with a previous, less severe, security update. We previously look at the rate that Drupal 7 was updated to 7.27, which fixed a moderately critical vulnerability. In that case after a week only about 5 percent had been upgraded and it was only up to about 15 percent at two weeks.

What is more troubling is how few websites have been upgraded to the previous release, Drupal 7.31, which fixed a moderately critical vulnerability. That version was released on August 6, so there has been plenty of time for an upgrade. As shown in the chart below, at this point 62 percent of Drupal 7 websites are still running a version below that: 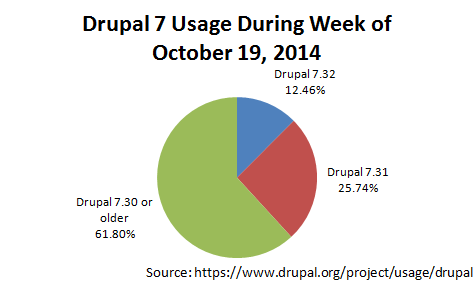 For those in need of an upgrade we provide one time Drupal upgrades and ongoing upgrades for Drupal 7 (with security updates in a day). You can use our Drupal Version Check chrome extension and Up to Date? Chrome app to keep track of the update status of Drupal websites you manage.