Back in June of 2012 we wrote a post mentioning that looking at false positives produced by a malware scanner would give an idea of the quality of the scanner. In that post we looked at a rather bad false positive from web security company Sucuri’s scanner. Moving forward nearly five years it is clear that Sucuri hasn’t improved the quality of their scanner as a month ago we looked at them falsely claiming our website was defaced because we have a page named “Hacked Website Cleanup”. When your scanner is that bad, it doesn’t seem all together surprising that it would manage to miss things that it should catch as well and a recent situation we were brought in to deal with confirmed that. But much worse, it also reconfirmed everything we have seen in the past that Sucuri is company that either really doesn’t have much clue about what they are doing or doesn’t care to do things right, and in this situation that lead to people’s credit card information being compromised.

A week after we wrote the post about Sucuri falsely labeling our website as being defaced we were contacted by someone with Magento website that was having credit card information entered on it compromised. Sucuri, who they had brought on while before to deal with the situation, was telling them that website was clean, despite the compromises continuing to happen. Since that claim that the website was clean was pretty clearly not true, the person behind the website was then looking for someone competent to properly resolve the situation.

If credit card information is being compromised when entered on a website, the default assumption should be that the website is hacked. About the only other possibility we can think of is if the payment processor is compromised (which is lot less likely). So upon believing it was clean, Sucuri should have realized they were missing something and figured out what they were doing wrong, but they didn’t.

At that point we assumed that code causing the credit card info must be well hidden seeing as Sucuri couldn’t find anything. But after getting the response about the payment processor, we did quick check of the website from the outside and we immediately ran across part of the problem. It wasn’t even detected using any highly advanced proprietary technology, but off the shelf tools.

What we noticed was that there was JavaScript being loaded from the domain adyenweb.com through this script tag:

The code in the file being loaded from that was highly obfuscated (when we ran through a tool to deobfuscate it, all it could pull out is that the code was requesting another file that was an encryption library for JavaScript):

At that point, considering the code didn’t look legitimate, instead of spending a lot of time trying to get a more complete deobfuscation before moving forward, we did a few other quick checks to try to assess the legitimacy of the domain the code was being loaded from.

First, we tried to trace where the server the domain was hosted on was, but found that it traced back to Cloudflare, which could have pointed to this being legitimate or it could have been someone with malicious intentions protecting themselves through Cloudflare (which is apparently a fairly common thing).

Second, we looked at the domain name registration, which didn’t look all that suspicious, but the domain was only registered on March 17.

Finally we tried to take a look at the website, but we found that there was nothing served at http://adyenweb.com or http://www.adyenweb.com. There also was nothing that came up for it in a Google search.

At that point we could safely say that this was at least part of problem. At the same time we noticed that despite something fairly obviously malicious being on the website Sucuri was telling the public the opposite about the website, as the website had this badge claiming it was “Secured by Sucuri” at the bottom:

Clicking that brought up this: 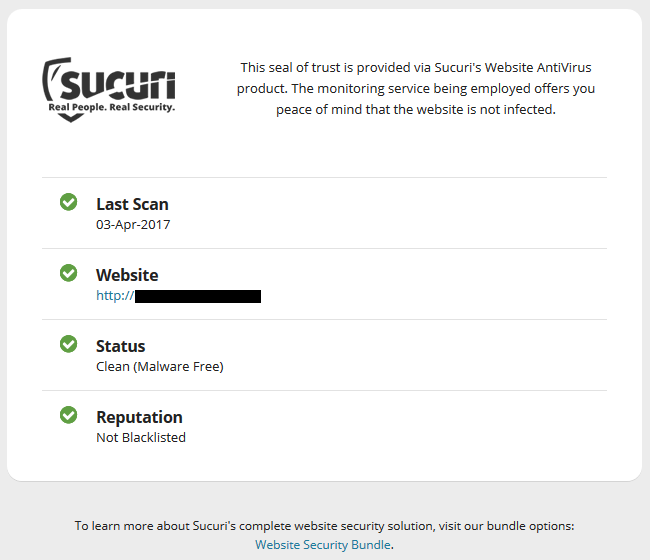 Not only did they claim the website was clean, but that their service “provides peace of mind that the website is not infected”, despite that not being true.

After we got access to the logins, we found that script tag shown earlier was stored in Magento’s settings in the database (as shown from phpMyAdmin): 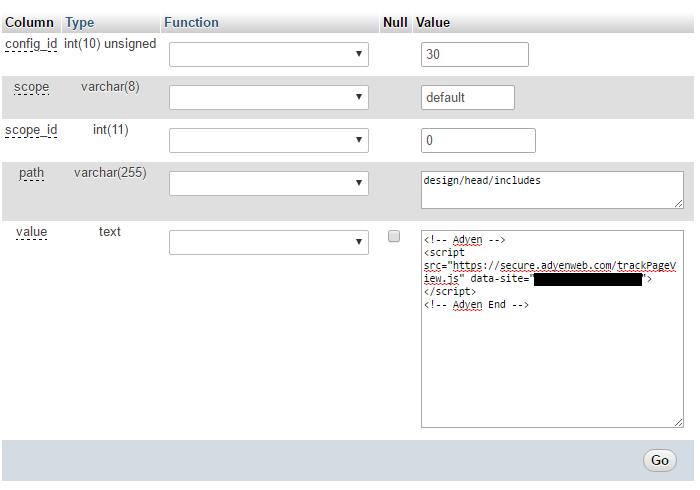 This turned out to not be the only fairly hard to miss portion of the hack that Sucuri missed. In the root directory of the website was the backdoor script that the hacker was using to take actions on the website. That was something that Sucuri should have noticed at multiple points. Those points being during a visual inspection of the filesystem (since you need to get an understanding of what all is part of the website when first assessing the situation), during the reviewing the website files for malicious code (it wasn’t something that was obfuscated in a way that would make detection difficult), and when reviewing the log files to try to determine the source of the hack. In looking at the logs we found that the backdoor script had most recently been accessed two days after adyenweb.com was registered.

The backdoor script looks like it might have been on the website for nearly a couple of years, so we were not able to say what was the source of that was, but continued reviewing of the logs files showed that after it was removed and the various logins changed the hacker no longer had access to the website. So getting this resolved was rather simple for a competent company, which this incident shows Sucuri is far from.