Recently we had someone hire us to clean up a hacked WordPress website where one of their concerns in regards to dealing with the situation was that they were being warned by WordPress that they were using an “insecure” version of PHP: 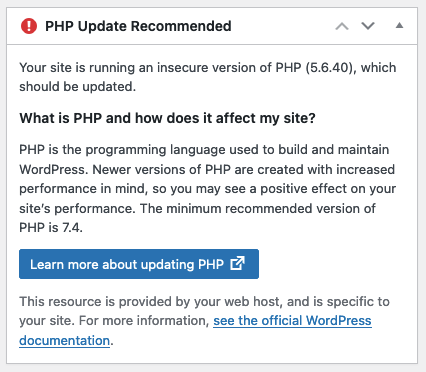 What that referred to was use of version 5.6.x of PHP, which is no longer supported, with the website.

With PHP, you have to go back to May of 2012 for an instance where there was a vulnerability that was fixed, which then had widespread exploit attempts. Even with that, the vulnerability was only exploitable on a subset of PHP installs, due to only being an issue with one particular setup.

That doesn’t mean that you don’t need to keep PHP up to date, but it does mean that if your website is hacked, unless a new equally serious vulnerability has been found in PHP, then the PHP version likely wasn’t part of the cause of the hack. It also means that when dealing with a hacked website you don’t need to rush to change the PHP version. Which is a good thing, since switching to a newer version could cause software that isn’t designed for it, to break.

As part of our hack cleanups of WordPress website, we can handle getting the software used on the website compatible with the newer version of PHP and the PHP version brought up to date (to the extent that isn’t something that the web host has to handle), as we did that website.