Microsoft’s search advertising platform Bing Ads recently added a feature that has been available for some time with Google’s AdWords, price extensions. Those allow showing prices for various offering as part of ads. It looks like Microsoft is rolling out access to that over time as they launched last week and they were only available in our account earlier this week. After creating some, we had to wait several days for them to be reviewed. The result of the reviews was that all of them were disapproved. The explanation for those disapprovals was as follows: 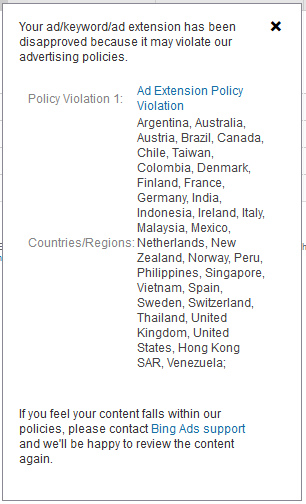 The policy those extensions are apparently violating is the vaguely named, Ad Extension Policy Violation. Following the link takes you to a page that currently contains no information on price extensions.

Without any information related to them we have no way of knowing if there is actually some issue that we should be resolving before asking for them to be reviewed again.

The launch announcement did mention a couple of requirements for them, which the price extensions we created are in accordance with:

We contacted the Bing Ads’ support and let them know of the missing information, so hopefully that will be resolved before too many people run into this. In the meantime we wanted anyone else running in to this mysterious disapproval to know that they are not alone in that.

It would be an improvement if Microsoft would provide more clear information as to why something is disproved instead of just pointing to a broad category that encompasses a number of different issues.

Yahoo and Microsoft announced today that they had received regulatory clearance from US and European regulators. Under the pact Microsoft’s Bing search engine will power Yahoo Search and Microsoft’s AdCenter search advertising service will provide search ads to Yahoo Search. The companies had announced the pact in late July and reached a finalized agreement in December. The companies have set a goal of serving results from Bing in Yahoo Search in “at least the United States by the end of 2010”. The transition to serving ads from Microsoft’s advertising service in Yahoo Search is planned to occur “prior to the 2010 holiday season, but may wait until 2011 if they determine that the transition will be more effective after the holiday season”. They expect a full transition by early 2012. According to the companies, Yahoo will build its own “search experience” on top of Bing’s search results by “integrating rich Yahoo! content, enhanced listings with conveniently organized information about key topics, and tools to tailor the experience for Yahoo! users”

According to Nielsen’s December data Google share of US searches was 67.3 percent, an increase of  1.9 percent from the previous month. Yahoo’s share dropped .9 percent to 14.4 percent and Bing’s share dropped .8 percent to 9.9 percent. Nielsen also reported that there were 9.9 billion searches performed during the month.

Yahoo and Microsoft have finalized their agreement that will have Microsoft provide the search results and advertising for Yahoo Search. The definitive agreement was originally scheduled to be completed in late October and was delayed while details were worked out. The pact will still need to receive regulatory approval before it can begin which the companies said that they hope will occur in early 2010.

Yahoo and Microsoft have delayed finalization of their agreement that would have Microsoft provide the search results and advertising for Yahoo Search. When the deal was announced in July, the two companies agreed to reach definitive agreement by October 27, 2009. Microsoft said  there are some “issues that need some additional clarity and definitive details” before the agreement can be finalized and that the two companies have agreed extend the deadline to finalize deal.  The pact will still need to receive regulatory approval before it can begin.

Microsoft announced today that they would be integrating Twitter tweets and Facebook status updates into Bing’s search results. Tweets can be searched from the beta of Bing Twitter search at http://www.bing.com/twitter. Microsoft made no mention of whether or when tweets will be integrated in the standard search results. In July, Bing added tweets from a limited group of high profile individuals to some search queries related to those individuals. Facebook status updates are to be integrated into search results at an unspecified later date. There have rumors that Google has been in discussions with Twitter and Fackbook integrating postings from their services into Google’s search.