One of the things that we often get asked about when it comes to hack cleanups, is how long we guarantee them. The answer is quite simple, if the issue comes back that means that we didn’t do something right and we wouldn’t charge anything additional to get it properly resolved. We would think that would be true of any upstanding company, but clearly most of the web security industry doesn’t feel that way, as we recently noticed with Wordfence.

When we discuss cleaning up hacked websites on our blog we don’t say that you should hire us, but that should hire someone that does things properly. That isn’t the case with Wordfence, which probably tells you a lot about them, as we saw recently with a blog post they wrote:

The most reliable way to recover if your website is hacked is to use our site cleaning service. Our team of experts will clean your site and get it back online as quickly as possible, and the service includes a detailed report and a 90-day guarantee.

What also stood out was there was their 90-day guarantee.

Looking at the page for that service, the backing they offer for their service is even more limited, as they say:

Work guaranteed for 90 days from service only if post-service recommendations are followed.

Who knows what those recommendations are, but that sounds like a way for them to weasel out of making things right if things went wrong.

There is another problem with a guarantee like this, based on what we have seen in often being brought in re-clean up hacked websites after someone else didn’t do it properly. Often times people haven’t realized that the issue hasn’t been properly fixed until after 90 days. When we are contacted about re-cleaning a website we always suggest that people go back to the people that originally did the cleanup and get them to do it right (even though if the previous company does that, it means less money for us), since if it was us, we would want to make things right . But with Wordfence if you noticed the issue outside of 90 days, you would be stuck paying them again if you did that (or needing to hire someone else to do it again).

Something else about how they promote their service really needs to be noted:

As the creators of the most popular WordPress security plugin, we have the most expertise in the industry.

Powered by the constantly updated Threat Defense Feed, our Web Application Firewall stops you from getting hacked.

The reality is that a WordPress plugin couldn’t possibly stop websites from being hacked in some ways (which Wordfence is well aware of) and Wordfence actually promotes their paid service as leaving people relying only on their plugin insecure. It seems like a bad idea to trust a company to clean up a hack when they have show that they have no qualms about lying to you and everyone else.

The second most popular plugin indicates that plugin popularity is not necessarily synonymous with a company that you want have anything to do with as that plugin uses a non-existent threat to collect users’ email addresses and had a “One-Click Secure” Button that did nothing except claim the website has been “Secured”.

Another element of Wordfence’s marketing stood out to us as well: 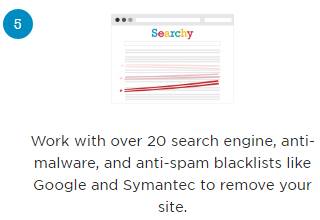 By work with them, they really mean they request a review through the same automated process as you or anyone else can use to do that.